Science and Turtles and Carousels, Oh My!

Friday we visited Dr Kirsty at work and Chelsea stole a lab coat to pretend she was a scientist… but then Dr Kirsty actually did real science and showed us some cells under a microscope. It was awesome being in the lab and seeing what the Doctor gets up to.

When we got home that night, Chels decided to spend some time with Ronnie and Reggie, Kirsty’s pet turtles. They are super cute and surprisingly fun to play with! 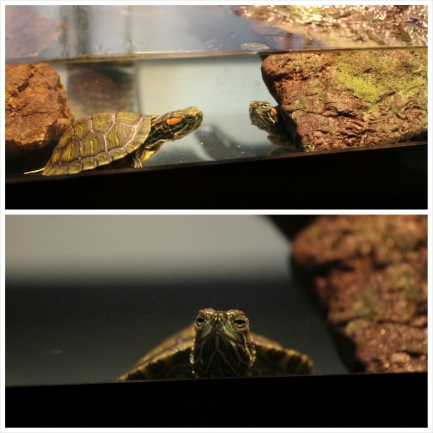 Friday night, Kirsty invited a group of her Boston local friends around and we shared a real American pot luck together including the big red cups for drinking and American flag plates for our dins. 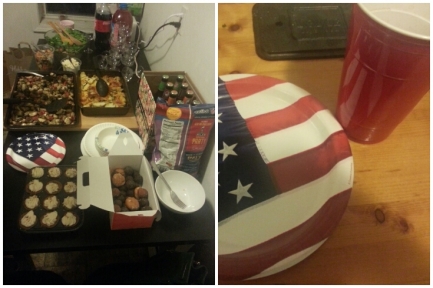 Saturday we spent the day with Kirsty doing a bit of touristing around. We headed to the Mapparium first which is a really cool 30ft globe made of stained glass. You stand in the middle of the globe on a bridge so that you’re inside the world. The only catch is that the globe was built in the 1930s so the map was a little different to now. But we found NZ!

Then we headed to Carousel #7 of the Great American Carousel Tour! This one is the most unique we’ve come across because each of the creatures were designed from drawings that local school children drew. And the animals all had the name of the child carved into them. So we had birds and butterflies and bugs and all sorts! Theresa rode on a butterfly, Kirsty on an owl and Chelsea took a fox. Super cool! This was also the most unique music we heard – it was playing 90’s pop music (which seems to be a popular choice for locals around Boston) – instead of the traditional carnival music.

Last night we wrapped our stay in Boston with a delicious dinner at the lovely Bridget & Khaushik’s house to end what has been the most wonderful time spent catching up with Kirsty and her friends.

[who gets the above reference?!]

This is how excited (and silly and tired) we were on the plane! 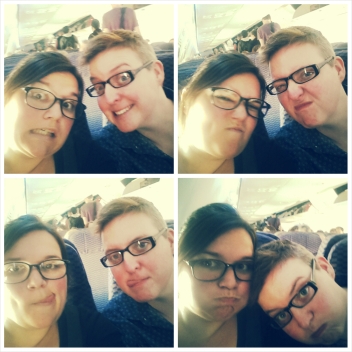 So Tuesday we dropped off the rental car and Kirsty directed us to Chinatown for an amazing and HUGE meal. We then went on a digestive walk through Boston Common & Park.

And got to see the chubbiest squirrel yet!

From there we got to experience the ‘Kirsty Danielson Walking Tour of Boston’ which included the Boston Legal building and the gorgeous library which is the oldest in America… maybe… the tour facts got a little vague at times (most of the old guy statues were identified as Dumbledore’s long lost cousin or brother. Hmm).

Tuesday night we had a great catch up with friends old and new – reuniting with the lovely Bridget and meeting her husband and Kirsty’s flatmates… House mates? Roommates? We digress. Wednesday we slept in (SLEPT IN!!) and decided to have a chilled out day. We ended up taking up residence in Boston Common on our Yankees blanket (a dangerous thing in the Red Sox zone) under some beautiful trees and chilled – took photos, leaf peeped and read. It was so lovely to just stop for a couple of hours. 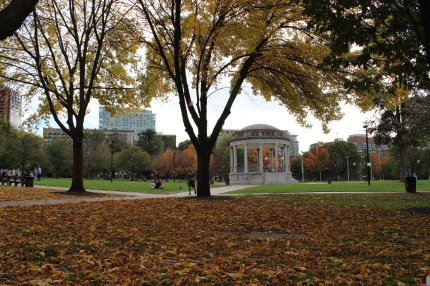 We came home and met Kirsty as she finished work, had a lovely meal, watched a movie and ended the night with tea. Fabulous.

Yesterday it was raining and stormy so we flagged all the touristy plans and went to the movies and what an experience that was – the place was HUGE, the snacks list was insane and the seats reclined. Brilliant. And then Kirsty took us to an amazing Italian restaurant for dinner to celebrate our wedding – SO good.

So! Monday started with a photo shoot with one of the most characteristic dogs I’ve ever met. He was afraid of the sound of the camera clicking (but loves the lawn mower – go figure right?) so Theresa distracted him with a super long game of fetch. 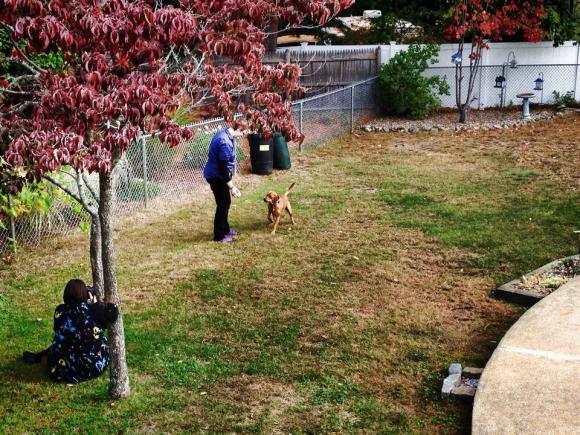 I love taking photos of animals as much as I like doing small human shoots. I have yet to do both combined (… I’m looking at you Trieu family…)

Last night I was actually offered a job in Nashua as a photographer of an event through a friend of Steph’s who saw Remy’s photos on Facebook – although unfortunately we aren’t in New Hampshire on the date! Following puppy playtime we went to a place that I was VERY excited about visiting – a pumpkin patch!

There were so many different types of pumpkins and the best kettle corn we have ever had. 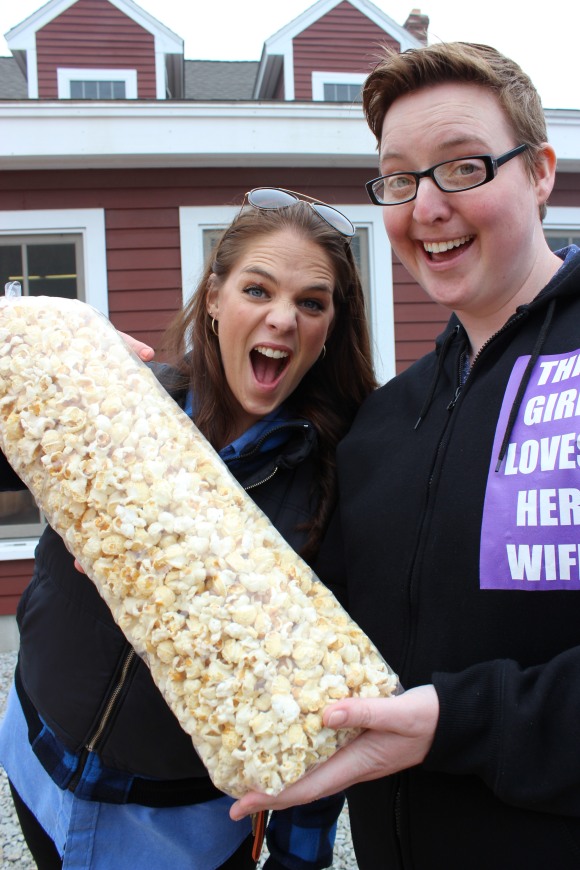 Following the great pumpkin adventure Steph graciously drove me around a bunch of back roads just to let me take photos of trees – the colours are so vibrant and beautiful and I love watching the leaves fall (I was informed last night that this is called Leaf Peeping. I am a Leaf Peeper. Theresa is also a Leaf Peeper but often is a dangerous Leaf Peeper as she Peeps Leaves while driving.) These photos are a mere few of hundreds – seriously, you want pictures of leaves? Come to me!

New Hampshire is so incredibly pretty. We had a wonderful time with Steph, Doug and Remy and looking forward to our next catch up! 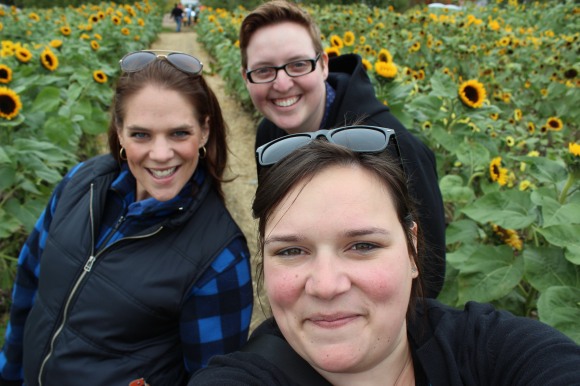 Yesterday we were up early and drove down to Provincetown, Rhode Island, for a quick visit to HP Lovecraft’s house and headstone for our wonderful Scott which was incredibly interesting – we made friends with the cemetery security guard and he told us about all sorts of strange going ons – looking forward to a debriefing beer Dr Scott!

After a quick stroll around Brown University we arrived in Boston to see the fabulous Kirsty! So much awesome has happened already – Boston week is going to be amazing! 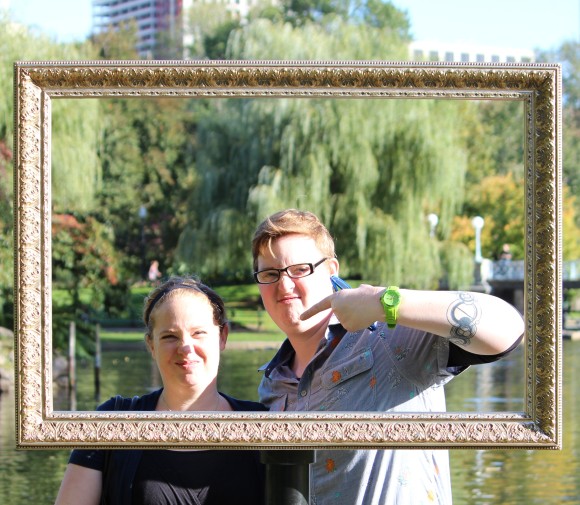 There is so much more to come!

On Friday we left Niagara falls (via an amazing pancake house – yum) and took our car Bernadette and our GPS Cynthia (names we bestowed on them) towards our next destination.

We travelled to Waterloo to see the wonderful Katie and Dave for a quick lunch visit! We got to see their adorable apartment and town and Chelsea forgot to take photos, except for this one!

From there we drove to Toronto through peak hour/ long weekend traffic (it’s a public holiday today) and made our way to the wonderful and awesomely named Chelsea Hotel for the night. Then we were up early the next morning to travel from sunny Canada to rainy Boston and pick up our new Car  – Nancy and our GPS – Helen.

We travelled through to Nashua in New Hampshire to meet an old friend of Theresa’s, Steph, her lovely husband Doug and this little guy – Remington!

Isn’t he cute?! Adorable. Yesterday we travelled through beautiful Massachusetts to Salem to explore the area and its history – we checked out the local psychic and witchcraft fair (apparently things go kind of crazy around Halloween) and we went on a bus tour with a guide giving us all the facts of the region before grabbing a bite to eat – fun day! 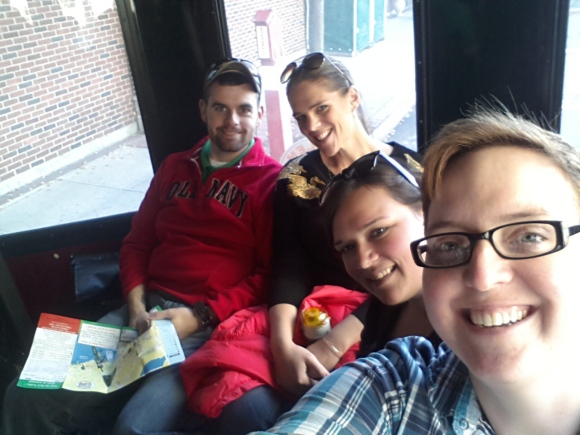 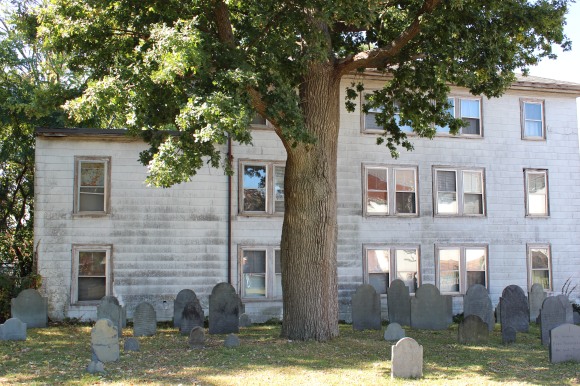 Tonight we returned to Nashua and Doug built a fire pit solely so that Theresa and I could make proper American smores with GIANT marshmellows. Yum.

Steph and Doug have also introduced Theresa to something that has the potential to be gross but is actually amazing – pumpkin spice beer! Served in a beer glass with the rim covered in caramel and dipped in cinnamon sugar = YUM! Apparently it’s only around for Fall – does anyone know an equivalent in NZ? If not we should start a new trend.

It has been so cool seeing all the pumpkins on the doorsteps and the Fall wreaths on doors. Fall is a cool time of year! Happy Columbus Day everyone!